A lonely garage inventor builds a seven-foot, banruku style puppet, and then takes it to a town dance competition, in this music video for the UK based band, Maps.

Shot in Wisconsin at the Historic Mill in Cedarburg, an art studio in Milwaukee’s Riverwest, and the Chandelier Ballroom in Hartford, the video and stars Didier Leplae (composer on The Pool) as the inventor who single-handedly builds a masterpiece. 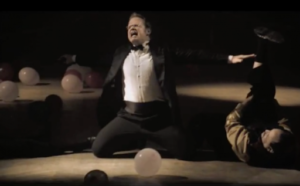 The video also features Ryan Dembroski as the rather creepy, tuxedo clad Master of Ceremonies and Milwaukee Dancing Sensations Myke and Debbi.

BONUS TRACK: For more Myke and Debbi, see this video we did several years ago, filmed by Frank Anderson and David Dahlman.