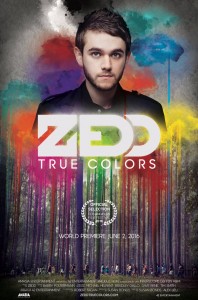 “The documentary, directed by Susan Bonds and Alex Lieu, chronicles the making of Zedd’s latest album True Colors, as well as the series of elaborate listening parties that the artist and his team put on for a small group of loyal fans ahead of the album’s release. Taking place in a series of exotic locations—from the Grand Canyon to the Empire State Building to Alcatraz Island—each event allowed fifty lucky fans to hear one of the album’s tracks for the very first time in a meticulously designed setting, and to have a meet-and-greet with Zedd afterward. Zedd’s personal investment in engaging directly with fans became the uniting theme of the evening, which certainly had the most exuberant and vocal audience I’ve ever seen at a documentary screening. (Screams of “I love you!” and “Marry me!” were not infrequent.)”