Whirlybird premieres at Sundance to rave reviews. From the Hollywood Reporter:

“Zoey Tur’s reign as Los Angeles’ preeminent eye-in-the-sky helicopter reporter preceded my own arrival here, but her presence in the semi-recent run of documentaries tied to the O.J. Simpson trial and to the L.A. riots made it clear that in addition to being a reporter of almost unfathomable influence, Tur had a fascinating history of her own. 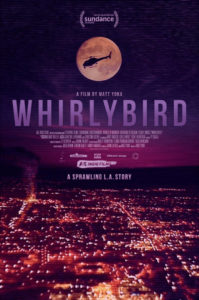 That history gets respectful-yet-clear-eyed treatment in Matt Yoka’s Whirlybird, part of the U.S. Documentary Competition field at the ongoing Sundance Film Festival. Whirlybird is a bittersweet portrait of the personal journey that led to Tur coming out as trans in 2013, paired with a chronicle of the explosion of breaking-news TV coverage in Los Angeles in the ’80s and ’90s, and balances those things without sugar-coating, in largely impressive fashion.

Perhaps more than anything, Whirlybird is a complicated depiction of a marriage, hardly the first chronicle of a family’s disintegration, but not one you’ve ever seen recounted in exactly this way. One thing viewers will surely notice immediately is that Marika, Zoey and their children Jamie and Katy (the latter an MSNBC reporter following in the family business) aren’t being interviewed together. It’s equally unavoidable to notice that Marika, Jamie and Katy all refer to Zoey as “Bob” or “Dad,” and that they use “he/him” pronouns. This is a family that still has issues and you can sense some, but definitely not all, of them being worked through on-camera as the film progresses.

This is appropriate because all of the highs and lows of Zoey and Marika’s marriage were caught on-camera. These are home movies on broadcast-quality tape, as Marika puts it. That means the arguments, and some are vicious, are captured at that same high standard (and usually at elevated altitudes). This is not a movie intended to make Zoey look good, and her regret and introspection are palpable, ultimately dominating the film in perhaps the same way that her obsessions came to dominate the family.

Yoka has a good sense of what his story is here. The doc restricts interview subjects to the core Tur family and to helicopter collaborator Larry Welk, presumably on the grounds that you don’t need other talking heads to say things like, “Man, that was a death-defying thing they did!” or “Boy, that ended up being the dominant image of the L.A. riots” or “What they did with that helicopter was really important.” You just understand. And when Zoey’s own footage features her getting into physical altercations with police officers and getting threatened by Sean Penn’s entourage, nobody from outside of the situation would be able to offer more trenchant commentary than Zoey’s observation: “Well, back before the sex change and estrogen, I was infused with this wonder hormone called testosterone.”

Whirlybird is informative and thrilling. It’s also profound and sad. And maybe it’s got threads of inspiration and uplift as well. That’s a wide range of responses, and it’s as much as you could have hoped for if you watched those Los Angeles-set documentaries and knew Zoey had a great story of her own.”