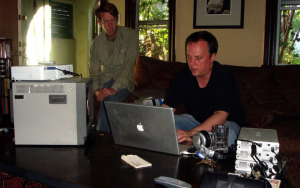 FilmandFestivals.com just announced the UK release of THE POOL.  The film was directed by Chris Smith and edited by Barry Poltermann:

The Pool received the Special Jury Prize at the Sundance Film Festival and was selected by the Museum of Modern Art in New York as one of the Best Films of the Year alongside The Dark Knight, Slumdog Millionaire, Milk, Iron Man and Wall-E.

“We shot the film for the big screen – shooting on 35mm and choosing to use many wide shots that allow you to take in the rich environment,” elaborates Smith. “I’m thrilled that The Pool is releasing theatrically in the UK. It connects with audiences and I am delighted that they will be able to see it on the big screen. We’ve had extended runs in the US and Canada theatrically and it has been great working with Mara Pictures to bring it to a new theatrical home.”