On today’s MARKETPLACE MORNING REPORT, David Brancaccio reacts to “The Last Blockbuster” and gleans some financial lessons, selecting it as his documentary pick of the month. 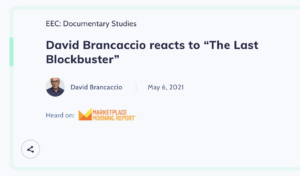 While our movie this month runs thick with people nostalgic for Blockbuster video stores (may those stores rest in peace), I am not one of those people. To me, Blockbuster signifies disappointment: It was the place where dreams of watching a certain movie went to die with the phrase “Sorry, all our copies are out.” If my culturally assigned job as daddy was to bring home the bacon in the form of the first “Toy Story,” I repeatedly failed in that during the Blockbuster heyday.

Still, I don’t have to fondly miss Blockbuster to draw key economic lessons from this movie. It includes a mergers-and-acquisition fable: When Viacom bought Blockbuster, it milked it of its cash to pay for another acquisition, leaving Blockbuster vulnerable. There’s also a key moment in the history of startup culture, told in the film as if it might be an urban legend but easily confirmed by Netflix CEO Reed Hastings in his book: He recounts that Netflix did offer to sell itself early on to Blockbuster for $50 million, an offer Blockbuster refused. Oh well.

Another economic lesson prompted by “The Last Blockbuster,” if requiring some extra digging on my part, is about the role of what are called “institutions” in economics. Institutions are the rules of the road, official or informal, that shape our economic interactions (as we learned in the textbook we read together last year).

Here’s how “institutions” of the econ kind had to change for the Blockbuster phenomenon to happen. When home video players started hitting the market in earnest in the early 1980s, movie studios freaked out. They anticipated loss of both money and control of their intellectual property. This went all the way to the U.S. Supreme Court, which in 1984 ruled (5-4) that VCRs and tapes were OK, not piracy-on-a-stick. Studios also tried to change the rules in another venue, Congress, where a law took shape to quash the taping technology. The bill wasn’t popular and it never passed. Without these rules of the road established, it’s unlikely there ever would have been a video rental era with Blockbuster front and center.