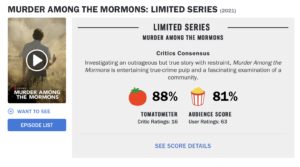 Chicago Sun-Times: “…an invaluable, extensive and journalistically sound record of events that will fascinate.”

TV Guide: “It’s the whydunnit — the mind-bending master plan exposed in the final episode — that truly sets Murder Among the Mormons apart as one of the strangest and most compelling additions to the true crime genre.”