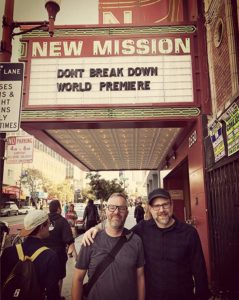 The band was on hand last night for the San Francisco premiere of Don’t Break Down: A Film About Jawbreaker. Edited by Erin Elders and co-produced by Dan Didier.

Don’t Break Down has been over a decade in the making, with the release of the film coinciding with the band’s 2017 reunion announcement.

Upcoming screenings include Riot Fest (in Chicago) & The Alamo Drafthouse theaters. The Los Angeles premiere is at Hollywood’s Vista Theater on Wednesday, October 4. .

Pitchfork dropped the trailer a couple of weeks ago.