“Fast Company” from director Jack Davidson premiered this Friday at the Music City Center in Nashville, TN. More than 300 drummers from across the world faced off in the 2015 World’s Fastest Drummer (WFD) World Finals. 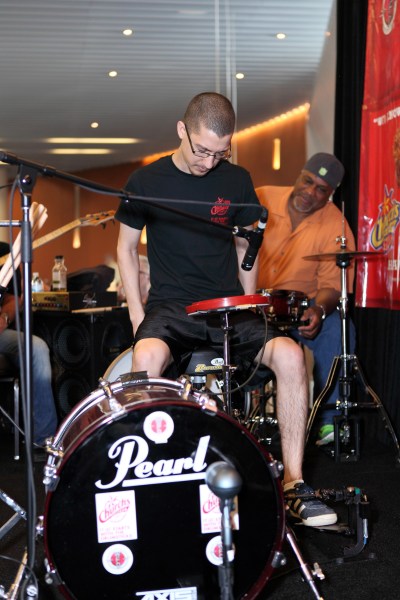 Braxton Burke, twenty-one, from Langley, KY, took home the title as the Hands Champion, with a 953 strokes-in-one-minute performance. Joshua Robinson, from Washington, DC, was named Foot Champion, registering 899 strokes in one minute.

Church’s Chicken celebrated the world finals by hosting several drumming-themed events, including the premiere of Fast Company. The film features the lives of some of the people who make World’s Fastest Drummer possible, including former champions and the founding members of the competition.

“Fast Company is a fun short documentary film with a unique flavor. World’s Fastest Drummer is a competition that calls itself “extreme sport drumming” for good reason, how many drum beats per minute can a person bang out? If you think 100 or 150, you’d be way off. It can run into a thousand. Fast Company is a quick glimpse into the competition created by legendary musician and world record holder Boo McAfee. In 1981, Boo drummed for 738 hours. That’s not a typo, the man actually did that.

With short blasts of interviews with contestants and past contestants, we see inside this crazy fascinating competition. One that is growing each year in size and popularity. The whole thing was made possible by the “Drumometer” a cool piece of tech I quickly became fascinated with. Folks of all ages enjoy competing and revisit the competition each year. There’s a strong competitiveness with the contestants, you find yourself rooting for one or the other. The film, brought to us by About Face Media and sponsored by Church’s Chicken (because who else knows drumsticks better?) played at this year’s Milwaukee Show at the MKE Film Festival. It was met by rousing applause, especially when Boo himself took the stage with his fellow film makers for a quick Q&A afterward. We had a chance to meet Boo and asked him a few questions. He is a genuinely kind man who was grateful for the positive reception of the film. I did ask about the possibility of a WFD competition here in Milwaukee, Boo said its possible so start brushing up your skills, I know I am. I really enjoyed Fast Company, if you see it coming to your area, be sure to catch a screening.”