“When a trespasser on the land needs to be dealt with so we see how the Aswang can create a mucus sack around the victim and save the person for consumption later. This of course is never really explained in the 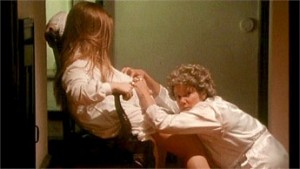 legend. Do these creature eat live people as well as infants? Anyway the story really picks up pace in the second half as Katrina goes from feeling a bit uncomfortable with the group to waking up during a feeding time. The chain reaction from that propels the third act into its final crazy leaps that includes  an aswang hanging by its tongue, captivity in the crazy woman’s house, a severed hand, fire, blood, birth and death It really is a great act and although Moses as Peter is a bit too over the top in his delivery it does not spoil the fun. So definitely a recommend from me on Aswang even with its flaws it is a very cool take on vampirism.”

From Horrorphilia… one of the best ASWANG reviews ever (audio only):

“Worth a watch. Pretty decent.”

“With the limited amount of characters, you don’t get all that many death scenes.”

Things get sinister when they arrive at the mansion, which looks like it was designed by Stanley Kubrick. The only inhabitants are the sickly mother, who keeps sucking on oxygen, a strange Filipino maid named Cupid, and an exotic white chicken who roams the premises freely. Oh yeah, there’s also an unseen sister who lives in a cottage out back. Apparently, she’s “a little touched.” At this point, I’d probably call a cab and head back home, especially after seeing a painting of an aswang, a Filipino vampire who drinks the blood of newborns, given prominent place in the study. Fortunately, our heroine sticks around, ensuring our enjoyment of a fucked-up, unusual vampire movie.

Shot like it’s an old 1970s relic, it has a similar feel to many of those slow paced, yet engaging horrors from that time period – until it picks up its pace substantially. A great find.