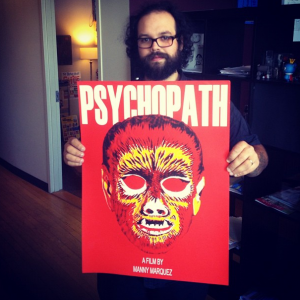 “Somewhat reminiscent, in a good way, of the excellent documentary The American Scream, Psychopath is a real gem. Directed by Manny Marquez and executive produced by Jack Turner (We Are What We Are, Cold in July), it chronicles Manny’s uncle Victor’s attempt to construct a haunted house theme park, The Psycho Path, in rural Oklahoma.

Victor is a garbage man who always dreamt of moving to Hollywood to get into the makeup effects business. Along with his wife Suezette, he buys some land and pours hundreds of thousands of dollars into an extremely elaborate attraction featuring a large cast acting out scenes from Sleepy Hollow, The Ring, The Texas Chainsaw Massacre and many more.

Prior to opening, Victor encounters a number of obstacles, including but not limited to hunters, grumpy neighbors, money shortages, and legal issues. But he soldiers on, and it’s easy to root for him and his band of misfits (best friend Mike, overeager local kid Kage, a local acting coach, his supportive family). Poignant, funny, and ultimately a classic underdog tale, Psychopath is a compulsively watchable tribute to a man who wants nothing more than to scare the living crap out of people every October.”