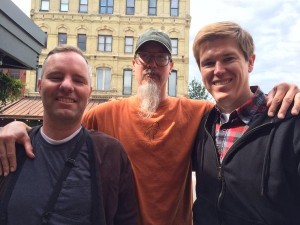 Jeremy Coon (Producer, Napoleon Dynamite) and Tim Irwin (Director, “We Jam Econo, the Story of the Minutemen”)… whom we collaborated with on RAIDERS!, were in town today and we had lunch with Mark Borchardt. RAIDERS! is the closing night film at the Milwaukee Film Festival tonight.

We are all scheming together on a new project that we hope to announce soon. In addition, September Club is editing Tim’s documentary about the legendary punk icons, JAWBREAKER.

Jeremy directed RAIDERS! with Tim Skousen (who couldn’t make the trip). Our hope is that this photo makes Tim very jealous.