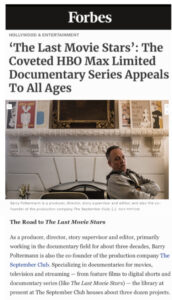 As a producer, director, story supervisor and editor, primarily working in the documentary field for about three decades, Barry Paltermann is also the co-founder of the production company The September Club. Specializing in documentaries for movies, television and streaming — from feature films to digital shorts and documentary series (like The Last Movie Stars) — the library at present at The September Club houses about three dozen projects.

“The whole boom in documentary content has actually caught me by surprise,” noted Poltermann. “As it becomes more popular, there is more of a demand for storytellers. While the general public doesn’t always think of the editor as the storyteller, the editor is really like a writer. We don’t write the lines, but we are constantly editing with the paradigms of what the moments are that the audience is going to feel that momentum.”