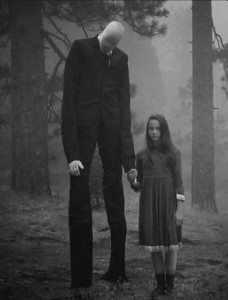 Today I read an article about the horrifying Wisconsin attempted homicide case wherein two 12 year old girls lured a friend into the woods and stabbed her 19 times.  A passing cyclist intervened, and thankfully the victim lived, even having returned to school this fall.  So why did two little girls try to murder another little girl?  Because they wanted to impress The Slender Man.

“Who the fuck is The Slender Man?” I wondered.

Thus began one of those internet deep-dives we all have into topics we know little about when we want to know everything.  I wanted to know why this thin dude would lead two little girls to savagely attack another.  This all led me to find out about the origins of The Slender Man and his growth into some kind of monster capable of reaching into the minds of little girls.

There are better places to get the specifics on The Slender Man’s story, but for brevity’s sake…  Basically, The Slender Man was created by a Something Awful user named Eric Knudsen (aka Victor Surge) in 2009.  TSM was an image of a tall, thin man, with a white, featureless face, wearing a black suit.  He was inserted into a couple of photos of groups of children.  Knudsen added quotes attributed to each photograph (which you can read at Wikipedia) that imply TSL is some kind of supernatural force that abducts children or kills them or worse.  So a new bogeyman was born.  But so what?  How did this particular incantation of a familiar monster land in Wisconsin middle school girls’ minds?

Apparently the original Slender Man – he’s in the back.

The answer is that TSM developed in an entirely new way – his characteristics (impossibly tall and thin, sometimes with tentacles), powers (teleportation, mind-reading, ability to compel), motivations (ambiguous and morphing, but always dark), and mythology all being essentially crowd-sourced openly online.  Like any of our fearful creations, his story and abilities were defined.  But rather than the top-down way we’re used to, such as the basics of Dracula (and thus all subsequent vampires) being defined by Bram Stoker or the framework for Frankenstein’s Monster coming down from Mary Shelley on high, TSM was fleshed out by online stories and memes by users with no ownership or authority over the original idea.  It was open source creation.  And it’s new to us.

Growing up with the authoritative power of mass media, really since the invention of the printing press, we’ve been conditioned to learn our heroes and villains, or monsters and slayers, all the mythology around our favorite worlds and stories from the all-powerful creators, be them Disney, George Lucas, JK Rowling, Guillermo del Toro, or Stephen King.  But before the rise of easily-made books and eventually radio, TV, and films, our stories and their heroes and monsters actually were crowd-sourced.  They were told orally, interpreted and reinterpreted, added to and subtracted from, and retold with details or even broad concepts changing based on the perspective and preferences of the storyteller.

That’s very similar to the way TSM developed into his current state.  Aaron Sagers even parallels the growth and development of Santa with that of TSM in a great read at The Huffington Post.

(The video above is a Slender Man send-up from online prankster superstar SA Wardega that has over 26 million views.)

The late literature professor and historian Walter J. Ong, PhD, asserted that this type of crowd-sourced mythology is the norm throughout human history.  A very smart Danish college professor named Thomas Pettitt agrees and posits that we have just ended the Gutenberg era – a time period starting with Gutenberg’s printing press, leading us to massive amounts of literature being easily and affordably available and, essentially, the end of oral storytelling being dominate and the beginning of top-down, authoritative storytelling.  But now with the advent of the digital age, we’re going back to the old way.  It’s not that we’re only going to be telling stories orally, or that we’re going to lose stories being crafted and protected by Hollywood film studios or major publishers, it’s that we’re all now able to be actively in on the creation of our myths and characters and worlds and the stories that take place in the same way that the oral tradition allowed anyone to hear a story and then retell it making whatever changes or add-ons or edits that person saw fit.  Pettitt calls the period of time we’re coming out of The Gutenberg Parenthesis, meaning that it’s a short exception to the rule, a blip in the history of human kind.

So who the fuck is The Slender Man?  He’s a crowd-sourced monster, not all that dissimilar to any number of monsters past, present, and future.  Why did these Wisconsin girls try to get on Team Slender Man by murdering a friend?  Most likely, these girls are severely mentally ill.  Most likely, they’d have found inspiration for their heinous crime in one form or another with or without this one particular bogeyman.  This attempted murder of a child by two other children is horrific and sad, but the focus on TSM is unwarranted.  Yes, he’s been cited by the two girls as motive, and he’s been pointed to as inspiration in other terrible crimes, but like other “causes” of criminal behavior and warped minds (when I was a kid rumors of satanism due to heavy metal music were rampant, then came the Matrix movies and Marilyn Manson and shooter video games and, well, you get it), it’s most likely he’s less a cause than a fascination of a mind in need of treatment.

What I’m saying is that The Slender Man is not exceptional in any way.  He’s a pretty standard monster.  And he was created and developed in a way that harkens back to telling tales around the campfire.  The only exceptional thing about this creature is that he’s made me and likely others really look at the way storytelling is changing – or rather returning to its roots.

I hope that in the story of the two little girls who attacked their friend, and who reportedly still believe The Slender Man is real, the ending is one that involves mental health treatment for the perpetrators and a happy future for the victim.